Happy as a Pig in dirt?

Happy as a Pig in dirt?

Happy Gardening! Gardeners say it all the time, but what does it actually mean? In the simplest way, it just means to have a good time gardening, but did you know that dirt itself can make you happy? Not just in the way gardening is a fun and satisfying hobby, but scientifically.

According to studies done by Mary O’Brien, an oncologist at the Royal Marsden Hospital in London and later, Dr. Chris Lowry at the University of Bristol and University College London, it seems the culprit is the bacteria Mycobacterium vaccae. This particular bacterium appears to be a natural biological antidepressant that is present in soil and has no discernable adverse health effects. Just a tablespoon of earth can contain as many as 50 billion microbes of which the Mycobacterium vaccae bacteria are just a portion. This bacterium seems to work on us like antidepressant drugs such as Prozac.

Interest in this natural miracle arose after cancer patients were treated by O’Brien with Mycobacterium vaccae as a cure for lung cancer. Although the treatment failed as a cure, subjects unexpectedly reported increases in happiness, vitality and quality of life. Lowry tested the theory on mice and reasoned that this effect could be caused by activation of neurons in the brain that contained serotonin.

Serotonin is a chemical messenger that’s believed to act as a mood stabilizer. It also assists in motor skills, healing of wounds, digestion and bone health. It helps produce healthy sleeping patterns and is commonly linked to feeling good and living longer. Conversely, a lack of serotonin is linked to depression, anxiety, obsessive-compulsive disorder and bipolar problems.

These antidepressant microbes are easy to utilize as they are introduced to our bloodstreams through physical contact with earth and by breathing them in. To reap the benefits, all you need to do is garden. Perhaps we should all be spending more time playing in the dirt!

Most avid gardeners say that their green spaces are happy places; that gardening is a stress reducer and mood lifter. Therefore, the presence of a soil bacteria antidepressant isn’t surprising to them. The science is fascinating, but not shocking to the happy gardener.

Need motivation to hoe out weeds, plants trees or sow that garden?  Worry not. Just rub some dirt on your hands, take a deep breath and carry on. You have harnessed the natural antidepressant in the dirt!  You’ll be happier, healthier and getting things done in the garden. Happy Gardening!

Barry Pearson
06:34 20 Dec 22
Great place to buy almost all your gardening supplies year round. Great selection and reasonable prices. I was out there the other day as they had a bogo sale on Poinsettias . Their stock and different varieties were incredible. I seen varieties that I never knew existed beforeI got 2 rose Poinsettias .I also found the staff to be very knowledgeable and helpful. I don't think the drive to here is really any further than a bigger name nursery from my home. And the prices are usually less.

Brenda Schmelter
20:17 08 Dec 22
Love this place. The energy! They have cool home decorative accessories as well as a large selection of fresh plants and flowers. The staff is friendly and very informative.

Ryan Abram
22:00 26 Nov 22
Always love this place in the spring. Today we discovered it's open for christmas decor. The staff was also friendly and made it very inviting

Joy Luangkham
22:44 05 Oct 22
An amazing place with beautiful flowers and greenery. A lot of decorations.

Jake Friesen
16:53 15 Jul 22
We were looking for a small Palm tree. Found one for our daughter's 10th anniversary.Good price too. Thanks so much! 😊

Nottellin noone
22:01 17 Jun 22
I bought some plamts there .the service was excellent . The quailty and care of plants was just asAmazing. My plants are doing really well. Pick up a hibiscus there if you can!

Heidi Hering
13:22 15 May 22
Beautiful place for flowersLots of selection of annuals, tropicals and some perennialsNot much in trees or shrubsWish they watered their plants better however

Yolli Klassen
03:27 08 May 22
So. Totally. Awesome. Stuff is colour-coded here!! (Like what?) I love that detail! Also they have cool vintage setups here.. really cute😍 definitely recommend you to go there!!

Kathleen Belan-Caslick
14:56 19 Mar 22
Love this place!The staff are friendly and knowledgeable.I bought a small String of Turtles a couple of years ago. It has grown so much….from 8 small stems to this beauty!!Healthy plants from the start.

jasper boyd
18:35 21 Aug 21
Love going in there to see all of the farm animals. The flower prices are amazing in there, and the staff kind and helping.

Judy Cox
13:15 18 Aug 21
The planted pots I purchased last month (July) are still thriving and gorgeous. Will forever make the trip to Family Flowers- best value I’ve ever found in our region!

Chris J Powell
12:09 17 Aug 21
As always, the staff was able to assist me with answers to my questions as I added some much needed life to my humble abode with indoor plants.

M D
03:03 02 Aug 21
I really loved my experience here. I'll definitely be back. Staff were awesome and so super willing to help and answer questions...great selection here! Go here and get your plant love on!

Damian David Chapman
16:50 22 Jul 21
Love this family run business as they have something for every gardener's needs & wonderful unique garden decor at surprisingly reasonable prices.

Josie Elliott
13:02 14 Jul 21
Well kept, low on perennial flowers at this time, however tons of annual flowers from one end to the other. Color coded in sections so you can go right to the colors of plants you are looking for

icmufc
03:15 01 Jul 21
We bought a bunch of flowers and plants back in May and they look great so far, they were reasonably priced for the quality.

Angela Gough
18:27 10 Jun 21
Wonderful assortment of indoor and outdoor plants. Fair pricing, friendly staff. You will be able to turn your home into an oasis in no time

bob anderson
16:06 04 Jun 21
I just bought some beautiful coleus from the No Frills location at Wallaceburg and notice the customer service skills of the young man working there. They were excellent and this type of friendly, cheerful mannerism is too often lacking in many customer service employees.

Jocelyn
14:06 12 Oct 20
Love it here. Friendly and warm. The flowers here are very beautiful. My parents like it very much and I will recommend it to my friends.

Dragonlord jason
16:29 28 Sep 20
Great place to check out anytime of year lots to choose from staff are friendly and helpful prices are fair all depends what your looking for

June Baskin
21:58 28 Aug 20
Thier Employee, Chris, was so helpful! Knows so much about plants and very creative ideas from her!

Luke Durda
23:09 20 Aug 20
Great place to get flowers. The staff is super friendly and very knowledgeable. There is lots of parking out front.

rebecca Sadler
21:22 06 Jul 20
Love this place,so many plants and decorations for home.

Tyler Froese
02:48 24 Jun 20
Nice selection. Found what I wanted for a reasonable price. Staff were very friendly and helpful.

Charles Cook
15:50 28 May 20
All the other Garden centers were low on stock in St Thomas. Family Flowers had everything I needed and better quality. Price was similar

Michelle Motyka Grad
16:40 09 May 20
Gorgeous selection, I live 90km from the garden center but the drive is evey time worth the plants.

Randy Gordon
17:00 29 Feb 20
Lots of nice flowers very friendly would recommend to anyone

Kay Giesbrecht
20:37 18 Feb 20
I love how I can take my 2.5 year old and he loves the place it's easy shopping here with small children! So incredibly family friendly! Great employees who are always there to help and are very informative! Plants are pest free and never have root rot. All around an amazing place can't wait to go back!

Possum Cyanide
20:30 20 Sep 19
The flowers are nice and all. But honestly I come here to hang out with the goats. They help me with my depression and this place is the closest thing I have to a petting zoo.If I was in need of gardening supplies I would come here so I can chill with goats.

Marina Fisher
04:49 08 Sep 19
Friendly staff, great selection and reasonably priced! They even have a petting zoo for the kiddos.

Jim Lorraine House
14:31 08 Aug 19
Great selection. Staff helped me with how to Care for a plant I had at home

Bonnie J
21:38 24 Jul 19
Family flowers is so diverse! They have so many flowers and plants I haven't seen at other nurseries. This will be my new go to place!Great prices on both plants and planters. I was so pleased to find them on hwy 3 just west of St. Thomas. They are open year round and sell for those seasons.They have a small petting zoo to side with horses and some small animals. They were very knowledgeable about horticulture and not just telling me things to sell. They told me what was best for my plant. I will definitely be back to buy more as the seasons change.

Genna Klassen
13:27 06 Jul 19
My favourite garden centre! Has the best selection of houseplants. Have been able to find Monstera deliciosa, Pilea peperomioides, string of turtles...albeit the prices seem a bit higher in comparison for some things than you might be able to find elsewhere, but if you want something unique and healthy this is a great place!

Ken Wimbush
23:52 22 May 19
Plenty of variety and plenty of helpful knowledgeable staff. A nice family business.

Shelby
01:30 30 Apr 19
Always enjoy walking around and checking out the beautiful flowers. Staff are helpful as well

Jason Mailloux
23:24 18 Mar 19
Staff were all extremely friendly is recommending a plant and the kids had fun potting the plant right there. Also the mini farm was cute with a few goats, a donkey and some ponies outside.

Kyle Robillard
16:51 29 Mar 18
Great service and good to bring the kids to. They have a little area to feed goats. Plants are reasonably priced.
Next Reviews 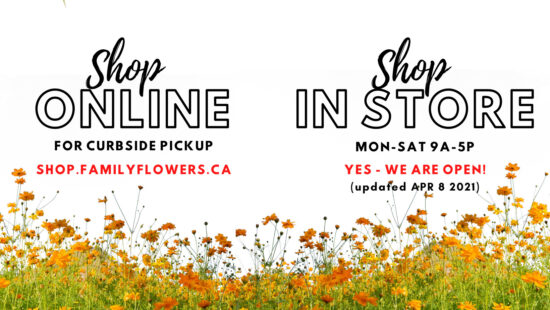 We believe in a safe workplace.

We believe in providing a healthy and safe shopping environment.

If you have any questions, please email jacklyn@familyflowers.ca